A woman named Deborah and a Street dog named Max 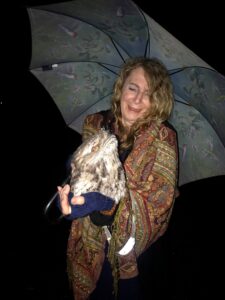 What was it about Max that first drew you in and made you want to help him?

The year before I was in Nepal there was another dog that I was feeding. He was really scared and I would feed him and he would eat the food when we walked away, so when I went back the following year I was looking for him but he was gone. I don’t know what made me first see Max. As you would know, there are loads of street dogs, but I remember seeing Max and thinking and saying to my Nepalese friend, “He is going to be my dog.” When I first saw him, he was such a mess, so I started feeding him. I contacted people I knew in Australia that were vets and dog people and they told me what medication to try and give him for worms, etc. which was a nightmare as I had to rely on my friend to translate and he didn’t even like dogs and I had to drag him everywhere. I knew Max was sick and I was ringing KAT, they eventually came and took him to KAT centre.

Prior to him going to KAT I was feeding him and trying to get advice. I asked at the hotel if he could be their hotel dog. Max would try and follow me; I would try and cross the bridge and he would and I would look back and see his tail coming and I’d have to cross the bridge and take him back. I went to KAT two days after they had collected him to see him; they gradually did find out that he was sick, Max was diagnosed with E.Canis which is transmitted primarily via ticks and causes anaemia and reduced kidney function.

Do you think it was kismet, you and Max?

As I keep saying, I’m not really a dog person. Dogs aren’t at the top of my list. I don’t know, there was something about him and I still think about him a lot. I just felt some other connection with him.

I do know what you mean, he had those eyes and he would give you hugs with his paws and legs wrapped around you while looking at you.

I did talk to some old guy that lived near where Max used to live and he said he remembered Max from about 8 years ago; that he was originally a mountain dog and his owners brought him to Kathmandu. From there we don’t know what happened, whether his owners lost interest or didn’t feed him. But the guy said originally he was a very beautiful mountain dog.

It’s such a hard life for the dogs over there. I remember seeing a dog with distemper and I contacted KAT and they came can collected the dog. It was horrible seeing this poor dog that was only about 7 months old and so sick, and what was even sadder that it wasn’t a unique case.

I remember being surprised that you weren’t really a dog person, and that back home in Australia you had cats and that you were a wildlife carer? How did you get involved in helping birds?

I’m a wildlife carer and I have cats, which is a bit weird? I had a major relationship breakup with the father of my kids and I don’t know, it sounds a bit weird but there seemed to be birds everywhere, flying in front of my car and tapping on my bedroom window. They were going tap, tap, and at the time I had a counsellor who kept saying look up, look up and I never took it literally. From there I started taking photos of birds and animals, and eventually I became a WIRES volunteer have been for a few years now.

What do most of the birds need help with?

The majority are hit by cars, or poisons. I live in an area where there are a lot of macadamia nut plantations and they use a lot of poison and baits. Birds and animals eat the rats and mice  that have been poisoned and they get secondary poisoning and it’s terrible. Also, due to climate change and loss of habitats, often birds come in and they are starving.

What happens when they get released if their habitats are gone?

If they recover we take them back to where they were found. Some of the birds that can’t go back to where they were found, because we don’t have a location or they are orphan babies that are raised in care are soft releases in my backyard, which backs onto a huge wetland.  Soft release means they have time to get used to the backyard in aviaries and other birds know they’re there and when they’re released supplementary food is left out until they adjust to the wild.

Do you get a lot of the same birds coming back that you had previously rescued from starvation?

No, but occasionally some of the birds do come back for a visit. Some birds that were released are gone straight away, some stay around for a while, some stay close by in the bush and some return.  The Tawny Frogmouth are the ones I see around the backyard and the bush at night or I hear them and there are some resident ones like Henry and Hermione (two tawnies that never left).  Some Red-browned Finches that I released a year ago are back either because I have new ones in care/ and or there’s supplementary food out.  It’s a great joy to see them and know that they’ve survived.  Smaller birds like the Blue-faced Honeyeaters, Magpies and Magpie larks stay for a while and eventually go to find their own territories or mates.

What can we do as individuals do to help the Australian bird wildlife?

Not using bait, and slowing down and not driving so fast, especially during dusk when a lot of birds, like tawnies, are hunting. Usually at dusk people are going so fast and don’t stop in time. The other thing is: people just leave them. I say to people, “If you don’t have time or you can’t stop, just give Wires a call, or an animal rescue group in your area. Call and give them the location.” Someone will come, and it’s better than leaving the animal there to suffer. It’s horrendous, they just suffer so terribly and unnecessarily and the quicker they get to us the more chance they have of surviving.

There is one bird in particular that I have fallen in love with and it’s Freckle, How long has Freckle been a part of your family?

Actually my vet calls Freckle the ‘assassin’ or the ‘bloody assassin’.  I love him, but he is a kookaburra and he kills things. In fact, he came to my attention for the first time 14 years ago when I first moved in. I’ve got a pond with goldfish and he got one of my goldfish and sat in front of me and smashed it against a branch and ate it. Since then I’ve placed chicken wire over the pond and Freckle hasn’t been able to find a way around it yet. If I leave a baby bird out in the yard, he would eat it, he gets jealous.

Yeah, they eat small birds. They are very territorial. Freckle is lovely. He and his mate Zena adopted two orphan kookaburras, and they did the same last season as well. The same with the tawnies, they look after them.

What do they do with them when they adopt them, do they feed them?

Yeah, with the tawnies they just sit outside the aviary and talk to them. They talk to them and they look after them when I release them. Probably teach them. With the kookaburras they feed them.

So Freckle and Zena they are regulars at your property?

Yes and also the tawnies Henry and Hermione.

Have you ever been able to take a bad photo of a tawny?

There isn’t a bad photo of a tawny.

Our wildlife is disappearing at a phenomenal rate. I wish people would just be more informed and aware and do simple things like leave fresh water out for birds in safe spots, slow down when they are driving and call a wildlife organisation if they hit a bird. Don’t use poisons, plant natives where you live, because that’s what feeds a lot of the native birds.

One of the things I learnt from your posts is: don’t feed birds mince or bread, which I had a word with my dad about as he used to buy the magpies mince to eat.

I always say to people, “Would birds find mince and bread in the wild? I don’t think so.” If you insist on feeding birds, you have to research what birds eat. People feed lorikeets seeds and it destroys their tongues because they are nectar feeders.  Often it’s well intentioned but it’s not helping the birds. It kills them. Mince is really high in salt and fat, it sticks in their beaks and rots them and rots their bones.

Even in suburbia should we leave water out?

Yes, definitely. As we are asking them to urbanise, leave fresh water in a safe place.

As Molly Meldrum would say, ‘do yourself a favour’ and check out Deborah’s photos here: Australian Birds (byronbaybackyard.com.au) 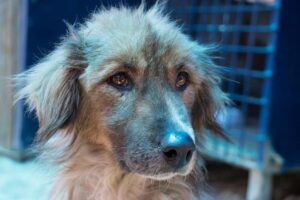 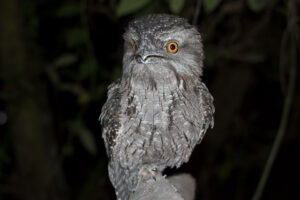 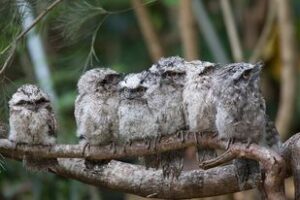