If you’ve been trying to eliminate plastic from your life and you’re a dog owner too, you may well be faced with a bit of a dilemma. When most dog owners step out for the walk, they don’t just carry their lead but a few poop bags as well.

Dog poo bags give us a sense of doing the right thing but in recent times questions over how long it takes for those little offerings to decompose have become ever more important.

It’s the big ethical question for dog owners who want to save the planet while still preventing their neighbours from stepping in some unsightly poop. According to news reports, there are around 900 million dogs in the world and 4.8 million dogs in Australia alone.

Plastic poop bags don’t decompose very quickly. If there are 4.8 million dogs and just half of those use up one dog poo bag a day, that’s 876,000,000 plastic bags getting into the ecosystem each year.

Although these are made of thin plastic, they can take some 5 to 10 years to decompose, if not longer. It’s no surprise that many dog owners feel a sense of conflict when they use plastic bags.

Most tend to end up in landfill where they get buried under other waste. Some are incinerated. There’s not much opportunity to recycle either way, of course.

The good news is that people are coming up with solutions which means Australian dog owners won’t have to feel so guilty when they are picking up and disposing of their poop.

The answer of course is to have biodegradable or compostable dog poo bags. The good news is that these are becoming more common in pet stores and supermarkets around Australia and you can also now buy them online.

There are still a few issues, however. Biodegradable dog poop bags degrade in a much shorter period but they need oxygen to do so. The fact that most poo bags end up in landfill often means that this kind of waste is denied that all-important oxygen.

Compostable dog poop bags, on the other hand, are designed to degrade by placing them into a compost heap. Our bags comply with the AS 4736 (Australia) standard which means they start to disintegrate within 3 months and fully biodegrade within about 6 months. It’s better for the environment and much better for the planet.

Many Australian dog owners worry about the health issues that may be created by putting dog poop into their compost heap. The evidence shows, however, that as long as the heap is turned regularly and kept at a suitable heat level, it’s enough to destroy any potential bacteria and parasites.

The Best of Both Worlds for Dog Owners

For dog owners all over Australia, finding an eco-friendly way to deal with dog waste is extremely important. With new options such as compostable bags, however, owners everywhere can feel less guilty and do their part to save the planet. 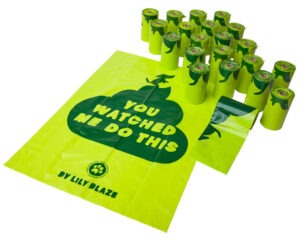