Why do dogs eat dog poop? 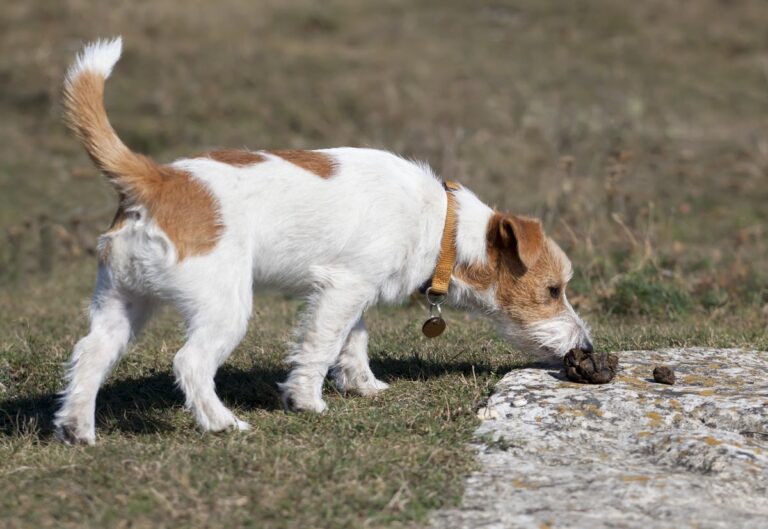 We all love our dogs, but even the most tolerant dog owner will concede that our furry friends display some pretty disgusting behaviours. Perhaps nothing is worse than when you catch them eating dog poop. And worse still, they tend to approach you for kisses immediately after their, ahem, treat. Yuck!

So, why do dogs eat poop?

If you’ve spotted your dog eating dog poop in the park, you’re not alone. It’s a situation that I found myself in after adopting my dog Buster at the start of last year. It was shortly after I put him on a diet that I noticed Buster occasionally attempted to eat dog poop.  This left me pondering three things:

In addition to being a little grossed out, I was a little concerned and spoke to my vet, who confirmed that it is quite normal behaviour and stems back to the fact (many moons ago) dogs used to eat human poop.

I was a little sceptical, but a little online research proved that this is true! Fascinatingly, it can date back 25,000 years to when dogs evolved from wolves as the wolves that were tolerant around humans would gain a better food supply. The suggestion is that human excrement regularly became a source of nutrients. Over the centuries, wolf-dogs became tamed and evolved into the pups we love today.

So, in theory, the fascinating story of dogs eating poop (there’s a sentence I never thought I’d write) is a massive part of their evolution.

But, why do they eat dog poop?

While my vet did tell me about the dangers (I’ll get onto that soon), the information about why dogs progressed from human poop to dog poo was little more than “it was just a part of natural evolution”.

They do it for nutrients (seriously Buster, I know I put you on a diet but I provided a far better option than other dogs’ poo!), although there can be other issues like anxiety and attention-seeking at play.

From a human’s perspective, it’s a behaviour that makes you winch. Crucially, though, it can be dangerous for your dog.

What are the dangers of eating dog poop and how can it be stopped?

When a dog eats his own poop, it’s not that dangerous. However, it could fill him up without providing much nutrition, which could cause indirect problems. Conversely, though, as my vet explained, eating another dog’s poo is dangerous. It can cause;

Using dog poop bags is an essential way to prevent other dogs from experiencing problems caused by your pup’s hormones. As for preventing your dog from getting ill in this way, the key is to stay vigilant in the park. Where possible, sticking to paths where dog poop is a less frequent problem will aid the cause too.

Other steps include using dog vitamins and timing feeds so that they aren’t overly hungry during walkies. When you get it right, it won’t just protect your dog’s digestive health. It’ll also allow you to control your pup’s diet with ease – Buster has lost 7 Kilos and the vet says 6 more to go, Oh, and you’ll never get a whiff of poop on your dog’s breath again…